In 2008, Barbara Stanley and Gregory Brown released a treatment manual for Veteran Affairs clinicians (in the USA), outlining a brief intervention “Safety Planning”.

They described Safety Planning as:

a prioritized written list of coping strategies and sources of support that patients can use during or preceding suicidal crises. The intent of safety planning is to provide a pre-determined list of potential coping strategies as well as a list of individuals or agencies that veterans can contact in order to help them lower their imminent risk of suicidal behaviour.

From this time, Safety Planning has been applied to a wide variety of populations and settings. The systematic and comprehensive approach to the person’s needs are noted to be a key feature of Safety Planning (Stanley & Brown, 2012) rather than focusing on a single action, such as identifying emergency contacts alone. Safety Plans are designed in collaboration with the client, following comprehensive psychosocial needs and suicide risk assessment. That is, the predetermined list described above, is derived from identifying warning signs and using their strengths and resources identified during the assessment, to de-escalate to a safer state. The quality of the assessment, fostered through strong interpersonal engagement and empathy, lays the foundation of the Safety Plan. Safety Plans must be personalised and reflect the client’s circumstances, strengths and capacity, and definitely are not a one-size-fits-all intervention (Green, Kearns, Rosen, Keane & Marx, 2018).

There are six critical steps in the development of a Safety Plan:

In addition to empowering the client to follow internal and external coping strategies according to their need, the sixth step of the intervention involves removing access to means. Removing the access to means for suicide has been demonstrated as a critical suicide prevention activity in its own right (Allchin, Chaplin & Horwitz, 2018; Barber & Miller, 2014; Hawton, 2007).

It is true that Safety Planning has not undergone the rigorous evaluation of randomised control trials. There has, however, been critical evidence to show that when Safety Plans are developed as they had been initially designed and intended, they can and do reduce suicide related outcomes (Green, 2018). It is widely known that across all treatments, fidelity to the model is critical for success and it is no exception for Safety Planning.

Critical differences between Enhanced Crisis Response Planning (E-CRP) and Safety Planning is the presence of Reason for Living in E-CRP, and the presence of Means Restriction in SP and respective absence of each intervention in the other.

The results of the randomised control trial between TAU, CRP and E-CRP were that both CRP and E-CRP resulted in clinically significant reductions in suicide attempts and inpatient hospital admissions when compared with TAU. Of note, the Reasons for Living component did not enhance results of the standard CRP intervention and was therefore not associated with better outcomes (Bryan et al., 2017). As with all research, caution is required in the generalisability and further, requires repetition with a larger sample.

Bryan and colleagues suggested that “crisis response planning may be an especially potent component of treatments such as dialectical behaviour therapy and CBT” (Bryan et al., 2017).

Despite the above evidence supporting Crisis Response Planning and Safety Planning, criticism have emerged, most recently by an Australian academic, Dr Helen Stallman, who has proposed an alternative approach: “Coping Planning”. Stallman has argued that “A number of theoretical and instrumental factors may explain the limited success” in suicide prevention interventions to date (Stallman, 2018, p.141) and that a “paradigm shift” is needed. While a “Shift in Paradigm” has been indicated for some time (see Hawgood and De Leo, 2016), the necessity of a paradigm shift as reported by Hawgood and De Leo (2016) pertains to cessation of the use of categorical risk assessment tools and the stratification of risk for the purpose of treatment planning. They do not advocate for and there is no evidence to suggest the need for a shift away from Safety Planning.

Stallman has argued that Safety Planning

…may in fact maintain suicidality. Through a process known as ironic processes theory, the antidote (i.e. safety planning) can act as the poison when patients are instructed to monitor their thoughts and behaviours in relation to suicide. The intervention focuses the patient’s attention on the very thing that the clinician wants to prevent (i.e. suicide). Distressed people, such as those experiencing suicidality, are most susceptible to this process

What is the evidence for Coping Planning? In conducting a search of several academic databases, peer reviewed journals and open access media, it was found that there is no published, peer reviewed research into the efficacy or safety of Coping Planning for reducing suicidality, let alone randomised clinical trials evaluating efficacy. There were two articles (Stallman & Wilson, 2017; Stallman, 2018) published that were conceptual opinions only related to Coping Planning for suicide prevention. Stallman and Wilson (2017) was a single page, reporting the theoretical potential to improve medical student’s mental wellbeing by teaching them Coping Planning for use with their patients. The articles note that the Coping Planning intervention is commenced following a disclosure of suicidality, in the absence of a clinical assessment. Neither articles report explicitly whether the Coping Plan is preceded by a needs based clinical assessment, including a comprehensive suicide risk assessment.

The author conducted a further evaluation of intervention components, based on Bryan and colleagues (2017) table, to include those components of Coping Planning reported from the single article by Stallman (2018) and it was found that there are no unique components in CP and indeed, there are critical exclusions from the CP model, likely to negate the value of the intervention for people experiencing crisis and suicidality. 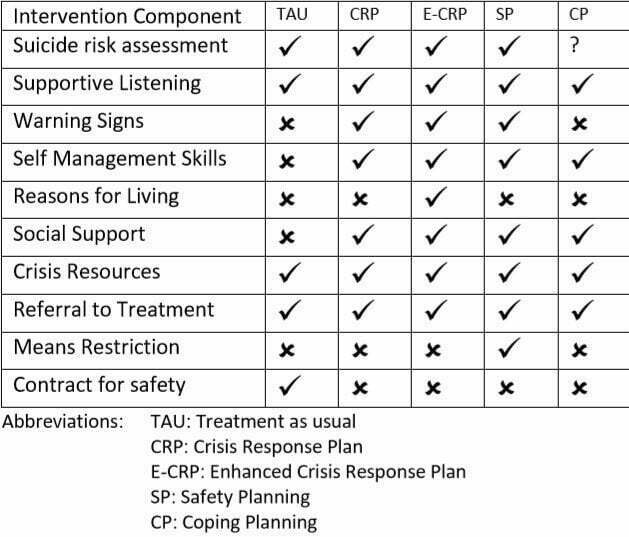 Without examining some of the additional errors in judgement posed by Stallman (including Ironic Process Theory), it becomes clear that Coping Planning is not a “new model” nor a paradigm shift away from existing practice in Australia, except to a more primitive model of brief intervention. The principles and components for Coping Planning presented by Stallman (2018) are in fact limited and potentially negligent when evidence for improved outcomes is found in alternate interventions. It is observed that Coping Planning does not therapeutically connect a person to their unique warning signs for suicide, to know when to commence their coping strategies. Further, failure to include means restriction as an intervention is equally concerning, given that this also has a strong evidence base. It would appear that based on intervention components, Coping Planning is little better than the “Treatment as Usual” intervention, though there is absolutely no evidence that this has ever been trialled in a clinical setting, under research conditions.

To reduce or remove components of interventions that are evidenced to reduce suicidality is extremely concerning and could conceptually, pose a risk to clients.

In examining the evidence, practitioners working with people whom may experience suicidality should continue to use the current best practice strategies of Safety Planning or Crisis Response Planning given that these are in fact based in evidence. There is certainly no evidence that a shift away from these strategies is warranted, despite further research always being indicated. Additionally, practitioners undertaking Coping Planning rather than Safety Planning, given the clearly defined problems, could be potentially negligent.